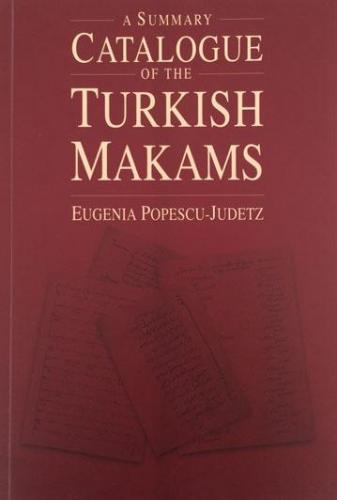 A Summary Catalogue of the Turkish Makams

https://www.pankitap.com/a-summary-catalogue-of-the-turkish-makams
A Summary Catalogue of the Turkish Makams
Pan Yayıncılık
40.00

For over three decades I had the opportunity to research on Ottoman musical writings in the Turkish libraries and to consult private collections. Concurrently, I was able to study Ottoman musical manuscripts kept in libraries outside Turkey. Along those years of research I carried out persistent investigations that gave me access to a large number of Ottoman materials ranging from the fifteenth century to the end of the nineteenth century. As a result of examining numerous musical manuscripts in Ottoman Turkish literature I discerned the commonplace of themes in the majority of writings and evaluated their structure at formal and generative level. Moreover, I was able to ascertain the significant purport of certain sources over others and to compare several versions of the texts. The idea of this catalogue evolved gradually in my mind from the perception that an explicit presentation of the makams would constitute a valuable reference both for evaluating the historical process of creating and performing music, as well as for establishing the inventory of modal categories and their taxonomic relations. As time passed, I was able to determine the development of a genuine Turkish concept in works that provided descriptive and analytical matter, and to detect through manuscript lines the significance of the process involving the semantics of the practice of music at different periods. The present book is mainly focused upon the practical theory of the makams reflected in the production and performance of the melodic scales the way they are described in Ottoman manuscripts.